The Soviet programmer Alexey Pajitnov in 1984 could not even imagine that a harmless hobby will one day glorify him for the whole world. On the basis of bought puzzle “Pentamino” Pajitnov created their own computer game using similar rules, and then showed it to my colleagues from the Computing center of the USSR Academy of Sciences. “Tetris” overnight paralyzed the institutions began to play a strange development Alexei. Copies of the game spread to Moscow, and then, through the efforts of foreign publishers and around the world. Today I’d like to tell you about a wonderful Japanese game Puyo Puyo Tetris (PlayStation 4, Nintendo Switch), continuing the tradition of the legendary puzzle.

The game “Tetris” very difficult fate. Around simple, at first glance puzzles created by a Soviet programmer, for more than a decade raged with serious passion. Several foreign companies fought for the right of publishing the game in different countries and for different platforms. This sparked a legal war that at some point in the negotiations intervened, even the Soviet government headed by Gorbachev. More than anyone in this battle suffered himself Alexey Pajitnov, who has not received from the sales of the game almost nothing. Only in 1996, when the rights to the game returned to its Creator, Pajitnov began to receive small royalties from its sales. It was then that he founded The Tetris Company LLC, and finally registered the word “Tetris” as a trade mark.

The game Puyo Puyo Tetris developed by the Japanese Studio Sonic Team. These developers are now responsible for the popular series of games about sonic the hedgehog, at one time famed for the company Sega. Unfortunately, in 2001, Sega was unable to resist such giants as Sony and Nintendo, so I left the console hardware market to concentrate on the release of their games for different platforms. Her place willingly took the U.S. Microsoft with its Xbox. Still I recall with warmth my favorite console of this Japanese manufacturer Sega Mega Drive and Sega Dreamcast. From time to time blow off the dust and indulge in nostalgia. Good news in this situation me is that Sega to this day produces great games, delighting its many fans.

Puyo Puyo Tetris is a unique hybrid of two popular all around the world puzzles. First, as you already know, the same “Tetris”, and the second is a Japanese series of puzzle games Puyo Puyo, born in 1991. If the rules of the first game, we are all aware of, about the second puzzle I have to tell you something. The developers very first game of this series from Japanese Studio Compile was inspired by the work of Alexey Pazhitnov, as well as two other remarkable puzzles of Dr. Mario (1990) and Columns (1990). In a glass instead of the figures from the dice fall round colorful creatures with eyes called “Buyeo” (Puyo). Rotating these creatures around the axis and laying on the bottom of the glass, the player has to collect groups of four or more balls of the same color so that they “shapefiles” like lines in “Tetris”.

Unlike games Pazhitnov, Puyo Puyo player should have beings so that,  one of the color groups, figures falling down, forming a new one. It makes the gameplay more thoughtful and complex. You need to think of the strategy several moves ahead, presenting how you will move to Buyeo in a given situation. The Puyo Puyo Tetris game not only offers players the classic mechanics of Tetris and Puyo Puyo, but first merges the two puzzles together. The glass turns falling the figures of cubes, Buyeo, and the player should have time to build up your strategy, not allowing the dam of multi-colored objects to reach the top. But the most interesting in the game Puyo Puyo Tetris – an incredible number of various modes, able to entertain the player for many months.

First, the game has a full story Adventure mode. Can you imagine that? The story mode in “Tetris”! The story tells about the adventures of animated characters from the Puyo Puyo faced with people from a parallel world, where at the head of everything is the philosophy of Tetris. Characters literally arguing with each other through duels in these puzzles. The loser is the one whose Cup will be filled faster than the opponent. Story mode consists not only of games. You will also have to perform various tasks, like “to cut a certain number of lines in Tetris for a minute” or “for a certain time to get a certain number of points in Puyo Puyo”. A job is not easy to pass on the first attempt. You have to replay them again and again, honing his skills and developing a specific strategy. The complexity of the scene mode high, but I can’t attribute it to the shortcomings of the game. These challenges only fueled interest in the player to the passage of jobs.

Fights between characters are exacerbated in those moments when one of them, for example, cuts the four lines in “Tetris” or shapeway several series of balls in the “Buyeo Buyeo”. On the playing field, his opponent may start to occur various troubles. Tetris bottom grow extra cubes gray color, and in the case of Puyo Puyo penalty blocks fall from the top, blocking access to the colored balls. To understand the different nuances of the game and its mechanics, I suggest you review the Lessons. Here in the form of easy-to-understand video tutorials will explain everything in vivid examples. For example, Tetris is such a clever technique called T-Spin. It allows you to cram Tons-a figure in seemingly the wrong places. Once you’ve mastered this trick, you will get a significant advantage over rivals.

When scene mode is passed (and make it extremely difficult, because there’s already 100 levels!), you can pay attention to other modes of Puyo Puyo Tetris. In the Solo Arcade mode, you can choose any type of jobs that you have seen in Adventure and battle against one, two or even three opponents controlled by artificial intelligence. Here, you and the classic Versus and the mix of puzzles Fusion, and the constant change of style, Swap, and fights the Party with a drop-down items, giving you the advantage over rivals, and battle space Big Bang. And that’s not all!

The game also contains a wonderful Challenge mode offers a huge number of various tests. For example, you offer time to clear almost completely filled with glass figurines. Or hold out as long as possible in the game, as the speed of the falling figures will continue to increase. You can play with tiny Buyeo, which greatly affects the strategy, or try to cut 40 lines mode Tetris Sprint games. I have listed not all the tests, so the game still has something to surprise you. Exploring in-game menu, I had the feeling that this game is truly endless. So a lot of content stuffed into it by the developers.

Multiplayer the game just fine. Especially when we are talking about the version of Puyo Puyo Tetris for Nintendo hybrid console Switch. First, you can play on one TV with their friends. If you have an extra set of controllers Joy-Con, you can play four. If you decided to play with his friends outside the house, then it’s no problem! Nintendo Switch can be used as a portable TV. Multiple consoles can also be joined into a local network, but this is assuming that your companions also bought a new Nintendo console and a copy of this game. If friends do not share your passion for “Tetris”, you can always get online and find interesting opponent out there.

Online, you will assign an initial grade, and depending on the number of wins over rivals your rank will continue to grow. You can create rooms with their own rules of the game or join existing sessions. Can find your friends and invite them to play against you. The game also offers you many opportunities for personalization. You can choose a specific game character, just like in a fighting game. Can buy in the embedded store for in-game currency alternative voices for your favorite characters and even a completely new look for figures of “Tetris” and “Buyeo Buyeo”. In the special menu you will also be able at any time to review all of the unlocked story inserts and listen to every music track or sound effect.

The game has a very interesting ability to save replays of your games. This is useful to ensure that after the end of the level you can analyze your mistakes, to look for additional solutions to seemingly hopeless problems and so on. To my misfortune, I wandered into this menu and included a video recording of a professional player from Japan. I shouldn’t have done. Now I have a serious complex for life. The Japanese played with such incredible speed that I sometimes have the feeling that this is not a man at all. No. Well, the truth! As it generally turns out to keep track of everything happening at that speed? Compared to him I’m the sloth of the cartoon “Zeropolis”.

The music in the game is easy, unobtrusive. Traditionally most of all I like Russian folk song “little box” in the modern electronic processing. It sounded in the famous “Tetris”, released by Nintendo for its handheld console Game Boy way back in 1989. Famous melodies in Puyo Puyo Tetris has got a new life and sound really impressive. But the American voice actors plot inserts, made in anime-style to me seemed so forced and unnatural that pretty quickly I began just skipping them. Anything not to hear that horrible acting! Anyway, all these plot of the insertion struck me as completely unnecessary and far-fetched. Both puzzles and is good in itself, without any grimacing characters. Somehow it reminded me of the recent game Super Bomberman R for the same Nintendo Switch. It seems that disgusting animation and voice acting for both games were done by the same people. 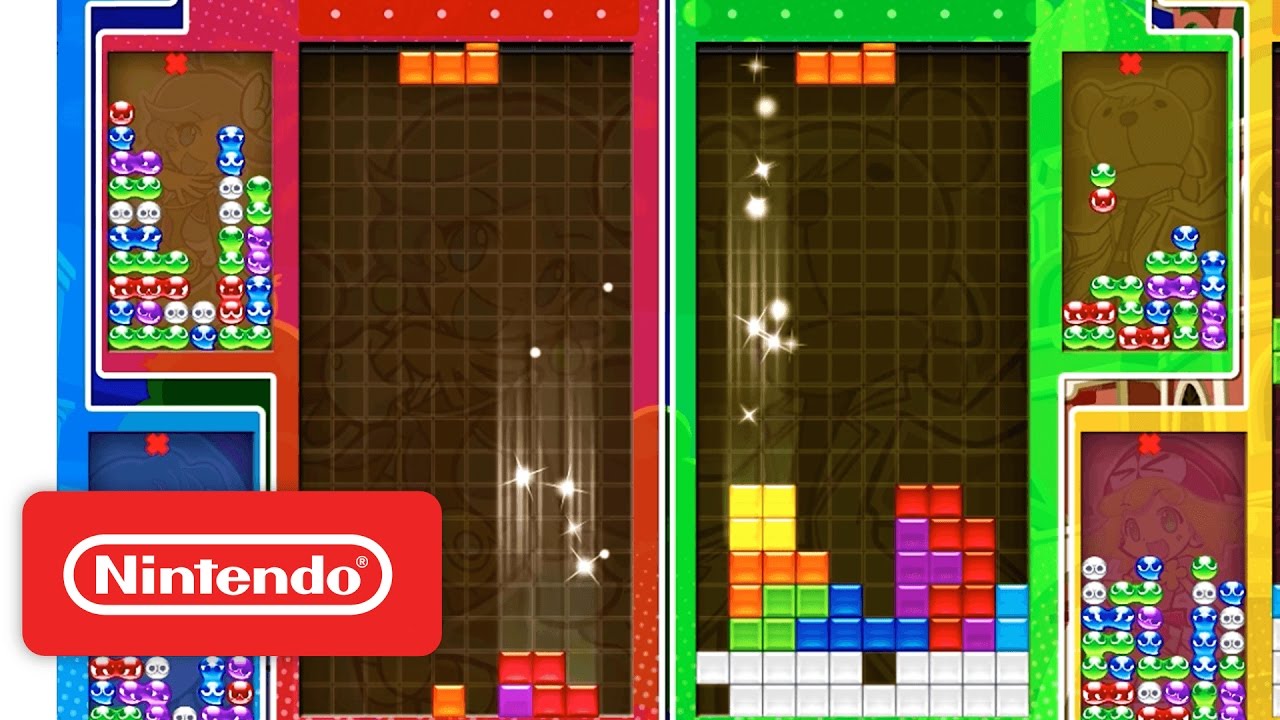 Whether you love Tetris like I love him? In my home collection of video games there are cartridges with the famous versions of this puzzle game for the Game Boy and Famicom. At the time I didn’t part with the handheld console the Nintendo DS, so I had the opportunity to play “Tetris”, as soon as I get a free moment at work. Time goes on, Tetris remains one of my most favorite games. As for Puyo Puyo – it is also good, but, of course, is not able to overshadow a masterpiece of Alexey Pazhitnov.

Puyo Puyo Tetris is a wonderful opportunity to both puzzles with a huge amount of content and game modes. The only thing that spoils the picture is still quite high the cost of the game. Now you can buy a cartridge for the Nintendo Switch priced at 2,499 rubles (it was originally worth 2799 rubles). Although given the love developers have approached the creation of the game, I’m ready to close my eyes even this. Because Puyo Puyo Tetris is almost impossible to put down. I put the game score of 8 out of 10.